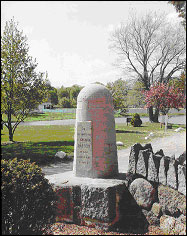 In a ceremony with dignitaries from France, the Town rededicated the Liberty Road Markers at Patton Park. These markers were a gift to the town from the people of France to express their gratitude for the role Hamilton’s General George S. Patton, Jr. played in the liberation of France.

Originally a section of Ipswich known as “The Hamlet,” Hamilton was incorporated on June 21, 1793. The Town was named for Alexander Hamilton, whose portrait became the town seal in 1903. Mr. Hamilton didn’t have any specific association with the town, but was most likely chosen for his importance in American history.